Graphic novels have gotten a surge in popularity lately, which is awesome. I’ve always been a big fan of the medium, bouncing between DC and Marvel (on a regular basis until DC royally screwed up the characters I loved, now I’m a Marvel girl for life). I’ve also, over time become an even bigger fan of those novels outside the two big pubs – stuff published Indie or by Image, Boom, etc. I thought I’d do a post about the series and issues I’ve been picking up and following of late! 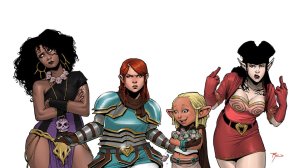 Rat Queens
Written By: Kurtis J Wiebe
Art By: Roc Upchurch
I LOVE Rat Queens. Imagine a puppy and a kitten playing in an adorable basket, that’s cute right? You love that right? I love Rat Queens more than puppies and kittens (and that’s a lot). I’m a devoted table top gamer so anything that pays homage to my favorite past time and is filled to the brim with kickass, smart ass, flawed, and beautiful women is going to get my undying devotion. Which also leads too… 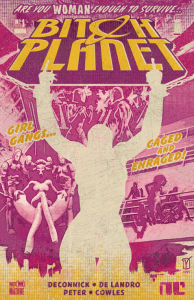 Bitch Planet
Story By: Kelly Sue DeConnick
Art By: Valentine De Landro
My next small tattoo is going to be a small NC just above my left inside elbow, standing for Non-Compliant in the world of Bitch Planet. If you are at all a feminist, or curious about modern day feminism then pick this up. Be warned this is graphic and adult and can be unsettling in it’s content. Kelly Sue does not hedge away from gritty stories and her characters are the richest I’ve read in a long, long time in the medium. 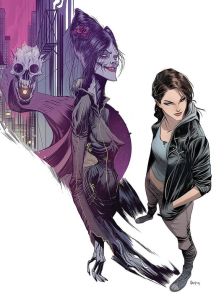 Hexed
Story By: Michael Alan Nelson
Art By: Dan Mora
Hexed was one of those spur of the moment picks. I read mostly on my Kindle on my Comixology app and I spied the first issue of the new run for fairly cheap. I thought ‘What the hell, I love Urban Fantasy right?’. This is a great UF series, even without having read the previous arc I enjoyed the pants off this. I purchased the digital omnibus of the original arc in fact on a hiatus to scratch an itch and it fantastically filled in what I needed. Great, fun series.

Fresh Romance
Story By: Assorted (click the link)
Art By: Assorted (click the link)
Fresh Romance is an anthology of sorts, with each issue continuing the stories. The three main stories are School Spirit, The Ruby Equation, and Ruined. All feature POC’s, a diverse romance slat (gay, lesbian, and I suspect some ace in there as well), and magic. I can’t pick my favorite of the three, I love them all but the first I’m always excited to read is School Spirit, I love Malie and Justine. They are adorable. 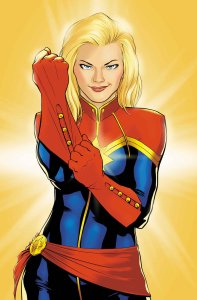 Captain Marvel
Story By: Kelly Sue DeConnick
Art By: David Lopez
Remember how I said I loved Kelly Sue’s writing in Bitch Planet? Yeah, it’s just as good in Captain Marvel. I’m behind on my beloved Captain, and intend to catch up in the next few weeks but she’s the perfect superhero for me. Not young enough to be stupid, old enough to be wise, but hilarious at the same time. She’s her own woman, and does what she can to help everyone. I’m waiting to see what happens to her movie cautiously. Carol is an older woman, even if she’s a superhero I want someone who can show that, really not a young, young woman. It just wouldn’t work for me (My dream-cast pick is probably Charlize Theron but that’s also due to Mad Max *wheeeeezz*).
What are you guys picking up? Anything good, or anything on this list you enjoy?