Oh ho ho! I had a pretty solid week this past week. Even taking out my Victober reads I have a few things to talk about! I have two short story magazines, a spooky book, and a book about books!  As always with these if you’d rather listen than read I have a link on the side to the Youtube channel.

First up is My Life With Bob : Flawed Heroine Keeps Book of Books, Plot Ensues by Pamela Paul. What a title on that one? And it’s a tiny little thing. I have a mixed bag of

emotions on this one. On one hand I think a lot of this was written from a point of privilege. She does recognize that at times, but sometimes I just remembered thinking ‘that’s really the thing you would have done?’. It just goes to show the very different walks of life people can go down. That being said, I fully empathized with how she thought of her books and her ideas about books. Keeping a large TBR and surrounding yourself with unread stories is a think I love, and for the first time I read someone agree with me. The modern idea of trimming the TBR has always seemed to be something I could never do so it made me feel a bit less like a freak to see it on the page. Her ability to associate her books and the constant need to record her books I also fully agree with as I’ve always done those things. It was very engaging, and a quick read. I think if you like books about books it’s definitely worth reading. 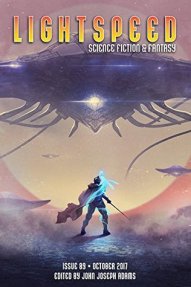 I followed that up with my two magazines! The first was Lightspeed Magazine: Issue 89. On the whole this was not the best issue I’ve ever read. The stand-out stories in this were the cover story Longing for Stars Once Lost by A. Merc Rustad and What I Told My Little Girl About the Aliens Preparing to Grind Us Into Hamburgers by Adam-Troy Castro. Longing was the perfect mix of fantasy and science fiction for me, while Hamburgers was a fantastic combination of comedy and a look at human existence. Besides that I have come to the solid conclusion that I do not like stories about video games. It doesn’t seem to matter who writes it, it’s an across the board ‘Nope’ from me. I’m so familiar with games myself, especially the games like World of Warcraft that every tries to adapt to their SF or Fantasy stories that it feels very stilted and forced. Good to know, and yes, if you are new that means I am firmly not a fan of Read Player One.

The next magazine I read was Nightmare Magazine : Issue 61. This one was much

stronger overall for me, that being said, it’s usually a much shorter magazine. Being honest, seeing the cover I predicted my favorite of the piece being Cassandra Khaw’s and boy was I right. Don’t Turn on the Lights was freaky and sad and so good. I listened to the audio version of this online and there is a particular line about a knife and a throat that UGH, still makes me shudder. Click by Brian Evenson was also really good, though it hasn’t stuck to me like Cassandra Khaw’s, I am still wondering what exactly was going on in that one. It was very twisty turny.

Finally the last book I read this week was The Bone Mother by David Demchuck and Holy Book Bindings Batman, you should read this one. This is what Miss Peregrine’s wishes it was, for adults, and very creepy. Using old photos from an archive David Demchuck pieced together short stories into a larger narrative of a people of Slavic descent who have ‘gifts’, both mundane and monstrous, who are watched over by The Bone Mother and the Night Police that hunt them. Some of these stories are as short as 4 pages but the creep factor here is turned up to 11. My skin was crawling on more than one occasion and I had to tuck in tight to read my romance to get some sleep I sooooo recommend this one. So creepy y’all, so creepy.

That’s it! Not a bad week right? And I still managed to fit in two Victober reads, Caxton’s Book by William Henry Rhodes and The Invention of Murder : How the Victorians Reveled in Death and Detection and Created Modern Crime by Judith Flanders. Caxton’s Book was not so great but Invention of Murder was SUPER fascinating. Look for my thoughts on those tomorrow or Wednesday in my Victober Wrap-up.