I didn’t do a wrap-up last week as I had only finished two things the previous week (in a sort of post-Booktubeathon slump) so you’re getting an extra long wrap-up for today! It was an overall ‘ok’ kind of week and most of these are solidly three stars, with one or two stepping just past that. There is one that’ll get it’s own full review later this week so I’ll not say much about it here, but otherwise… on with the thoughts!
As always there should be a video up on the channel to listen to instead of read if that is what you prefer.

Thomas after the end of Booktubeathon. I didn’t even realize going into this that this is the same writer as The Lady Sherlock series, the first of which I really enjoyed. About midway through when I was getting quite frustrated with it I realized it, and honestly it saved it from a DNF. I liked the premise of this a lot, a couple who are divorced and have been living apart for some time are forced back together in an uncomfortably long trip. I also really found myself enjoying the glimpses of history it offered as it’s set in India in the 1890s. My problems with it were two-fold. The first I assume was just due to this being an early book, but the writing felt so… broken and disjointed for me. Once I got used to the style and allowed for that the second thing that really got me was the actions of the husband in the past. STOP here if you don’t want spoilers – but the fact that they both remembered with mixed but with varying degrees attractiveness that he used to have sex with her when she was asleep and she’d wake up to him going to town on her REALLY disturbed me. I’m a very happily married woman and if I woke up like that I’d start screaming. That just violates a lot of personal space and consent rules to me, not to mention she didn’t want to have sex in the first place and that is why he was doing it. Just lots of NOPE there. – END Spoilers. The ending was just as sweet as you’d expect, it is a romance, but those two things just left me feeling ‘blech’ about the whole thing. 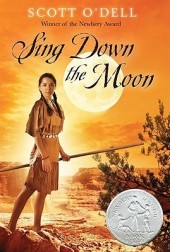 I decided to go for something short and simple after this and picked up the next Scott O’Dell book I had Sing Down the Moon. This is an extremely short, young middle grade book about a young Navajo girl, Bright Morning, who is first captured by slavers then after returning home is sent on the forced march from their home to Fort Sumner. This was ultimately a wrong age read. I liked a lot about this, much more than the last Scott O’Dell book I read (Zia) but I think I was simply too old to enjoy it. It manages to balance, not perfectly mind you but better than Zia, the history of the time period and the personality of Bright Morning and her story. As far as a historical children’s book goes this is definitely not a bad one.

The next three things I read were all Audio books. I know, I’m shocked too. It seems I’m

up and down on the whole audio book thing, and lately I’m really up on it. The first was the third Mary Russell book A Letter of Mary by Laurie R. King. The second Mary Russell book ended in a way I wasn’t particularly on board with, and honestly I’m still not sure if I am or not. That being said this book was much better as it simply treated the marriage as fact and nothing over the top or romantic was made of it. The mystery was also super intriguing, a friend of Mary’s whom she had met just once or twice before entrusts in her what could be a very controversial manuscript and then bad things happen and a mystery is set out. It was short, shorter than I would have liked but overall a really enjoyable read. I’ve already obtained both the physical and audio versions of the fourth and plan on continuing in the future.

universe, The Perfect Weapon by Delilah S. Dawson. This was just an hour and some change long and fun ride for that time. The only thing I’d have to say about it that’s a flaw would be the slightly over the top writing, very melodramatic, in the beginning. Once past that however it evens out. I wouldn’t say it’s necessary to the Star Wars canon but it’s interesting as the main character does have a cameo in The Force Awakens. So if you like little goodies and insider knowledge like that you might want to give it a shot.

a while via the audio book. This was Crocodile on the Sandbank by Elizabeth Peters. This was a lot of fun, as far as cozy mysteries go. I enjoyed how Amelia is basically an ass to everyone but still manages to have her soft moments and I also appreciated her independent attitude. That being said it was still obviously dated, anytime the characters talked about the ‘natives’ it was a little uncomfortable, and I do wish that Amelia (with her independent sassy self) had managed to do just a little more when it came to the mystery itself. She spent a lot of time flustered and sitting there at the end which was kind of a disappointment.

Next up I finished The First Signs: Unlocking the Mysteries of the World’s Oldest Symbols by Genevieve Von Petzinger. I enjoyed this one, and it had some super

fascinating tidbits in it, especially when it came to when ancient art was created and where. It does a really good job as well breaking some possible preconceptions that pop culture has put out there. I think if it’s a topic that sounds interesting this is a pretty intriguing read. I do recommend googling why signs and symbols are important to an idea of ‘modern thinking’ before reading as the one big flaw on this one I found was that she didn’t explain that till 75% of the way through which was a disappointment. So go in with that knowledge ahead of time.

Finally I finished How to Love by Katie Cotugno. This is a YA romance with a

focus on a teen pregnancy. It’s told in flashbacks, ‘Before’ and ‘After’ being the Before the pregnancy and her romantic partner left and After being when he came back. This was fun, and I really enjoyed everything about it except for the romantic partner in question Sawyer. He was ‘swooney’ or worth (I thought) even thinking about dating in either time periods. He had many problems in the ‘Before’ granted and it does acknowledge that, but I think he obviously had issues in the ‘After’ as well and he was still a bit of a dick. So, besides the romance (which is unfortunately a big chunk) I liked this. It’s one I say try if you like YA.

The one book I will only mention here is Graveyard Shift by Michael F. Haspil. I finished this one this week and a full review will be up in the next day or two.

That’s it, and honestly I’m so happy to get it done! Let me know if you’ve read any of these or have thoughts. Thanks for reading guys!