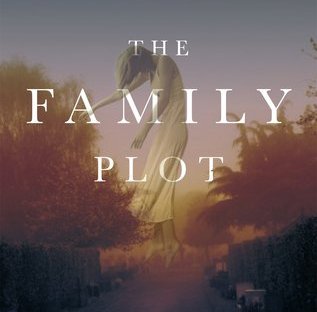 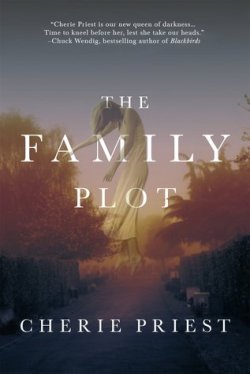 The Family Plot by Cherie Priest

Chuck Dutton built Music City Salvage with patience and expertise, stripping historic properties and reselling their bones. Inventory is running low, so he’s thrilled when Augusta Withrow appears in his office offering salvage rights to her entire property. This could be a gold mine, so he assigns his daughter Dahlia to personally oversee the project.

The crew finds a handful of surprises right away. Firstly, the place is in unexpectedly good shape. And then there’s the cemetery, about thirty fallen and overgrown graves dating to the early 1900s, Augusta insists that the cemetery is just a fake, a Halloween prank, so the city gives the go-ahead, the bulldozer revs up, and it turns up human remains. Augusta says she doesn’t know whose body it is or how many others might be present and refuses to answer any more questions. Then she stops answering the phone.

But Dahlia’s concerns about the corpse and Augusta’s disappearance are overshadowed when she begins to realize that she and her crew are not alone, and they’re not welcome at the Withrow estate. They have no idea how much danger they’re in, but they’re starting to get an idea. On the crew’s third night in the house, a storm shuts down the only road to the property. The power goes out. Cell signals are iffy. There’s nowhere to go and no one Dahlia can call for help, even if anyone would believe that she and her crew are being stalked by a murderous phantom. Something at the Withrow mansion is angry and lost, and this is its last chance to raise hell before the house is gone forever. And it seems to be seeking permanent company.

The Family Plot is a haunted house story for the ages-atmospheric, scary, and strange, with a modern gothic sensibility to keep it fresh and interesting-from Cherie Priest, a modern master of supernatural fiction.

Thoughts:
I’ve tried to read a lot of Cherie Priest’s work and in very few cases have I been able to finish them, and not because I’m not enjoying them! I put down Boneshaker only because of the awful light brown ink in the book (haven’t been able to afford the kindle copy yet), and I am still half way through Four and Twenty Blackbirds (that one was stopped by a week and half of migraines). The books I have finished by Cherie though I’ve really enjoyed. This and Maplecroft both hit it out of the park for me.

Something Cherie does great in everything she has done, especially the ones I’ve read set in the South is capturing the feel of it. I’m a Tennessee girl, so I’m really picky about the books set here. I’ve DNF’d a great many book for throwing a ‘token southern’ character or setting in and putting every damn stereotype to them. We aren’t all rednecks and ignorant as much as people ask me that at my CURRENT JOB when I mention I’m in TN. I swear… but that’s a rant for another time. Cherie really presents you an authentic feel and presents the mountains as appropriately spooky.

It is almost a checklist of your classic ghost story, but what really stood out were the characters. Even just the reason for them to be their, to take the house apart sales and pickings, was new. I, weirdly enough, enjoyed a lot of that aspect. The talking of what was good, what could be kept, and the little touches of house history that I feel like Priest when out of her way to find and introduce into the story. This was kept up by characters who sounded like they knew what they were talking about. I believed them all, and enjoyed the diversity in personality on all of them. It was also extremely refreshing to not have a romance, those are so often shoved in their unnecessarily. Instead our lead character is a strong single lead, and even responds to several situations with responses with maturity about that.

The story also touches on the horror of what women, especially those in in the WWI era would have went through in certain situations (granted our example is a bit psychotic) and what would have happened to someone who behaved outside of the norm. I would read an entire book from Priest set in this era similar to this. Especially if that book featured Hazel. Sold already. That particular era, and the idea of Spiritualism really fascinates me, call it a picked up hobby thanks to Sir Arthur Conan Doyle and my love of Sherlock, but that’s definitely a buzzword for me

Overall a short but excellent ghost story. It’s a fresh take on the standard horror story, I really recommend it if you’re tired of the same old haunted house stories.

1 thought on “Thoughts on The Family Plot by Cherie Priest”

My baby girl is a week old today. Totally unrelated but this has been the hardest and most rewarding week of my life. 😜 #adorawren #oneweek #daddysgirl
It's been a super hard few days starting to find our new normal so little moments of peace are amazing. 🥰💜👶💜🥰 #adorawren #princessofpower #sleepy #babyanddaddytime
We finally got to meet our Adora Wren. Our own little Princess of Power. 🐣👶🐥
Hubby took me for one last trip to the used bookstore yesterday before we go in to get induced tonight. I doubt I'll get much time to read them in the immediate future but I'm looking forward to when I can get to them! 📚😆📚 #lastbookhaulbeforebaby #usedbookhaul #bookhaul #bookstack #bookstagram
A book for me and a book for Adora. 📚🥰😁🥰📚 #books #littlegoldenbooks #artandarcana #DnDChristmas #dungeonsanddragons #bookstagram #newbooks
I picked up a *few* manga at the library. They should last me a day or two. The others are will definitely last a little longer 😆📚😆 #libraryhaul #library #bookstagram #starwars #historicalfiction #horror
Follow All Booked Up Blog on WordPress.com
%d bloggers like this: