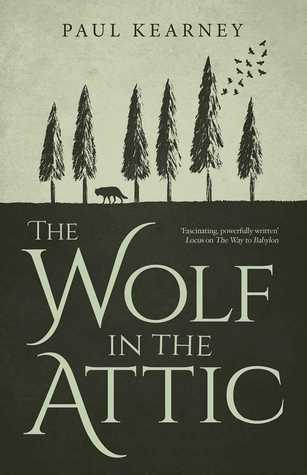 The Wolf in the Attic by Paul Kearney

A novel that will enchant readers of J.R.R. Tolkien, C.S. Lewis and Philip Pullman. The fantastical appears in the middle of 1920’s Oxford as a young refugee looking to escape her grim reality rubs shoulders with two of the founding fathers of modern fantasy, Tolkien and Lewis.

1920s Oxford: home to C.S. Lewis, J.R.R. Tolkien… and Anna Francis, a young Greek refugee looking to escape the grim reality of her new life. The night they cross paths, none suspect the fantastic world at work around them.

Anna Francis lives in a tall old house with her father and her doll Penelope. She is a refugee, a piece of flotsam washed up in England by the tides of the Great War and the chaos that trailed in its wake. Once upon a time, she had a mother and a brother, and they all lived together in the most beautiful city in the world, by the shores of Homer’s wine-dark sea.

But that is all gone now, and only to her doll does she ever speak of it, because her father cannot bear to hear. She sits in the shadows of the tall house and watches the rain on the windows, creating worlds for herself to fill out the loneliness. The house becomes her own little kingdom, an island full of dreams and half-forgotten memories. And then one winter day, she finds an interloper in the topmost, dustiest attic of the house. A boy named Luca with yellow eyes, who is as alone in the world as she is.

That day, she’ll lose everything in her life, and find the only real friend she may ever know.

Thoughts:
I used to play tennis, a lot. I’d have tennis lessons three to four times a week, my mom and sister would shuffle me down the courts and every time I fell trying to catch that damned yellow ball I’d pretend I meant to do it. I can’t say I remember those lessons or those bruises, but I can say I remember what came after. We’d go home, get cleaned up and while we had a snack we’d watch Dark Shadows. My mom loved that show, and so naturally I did as well. I’d sit and soak that show up like a sponge. What I remember so sharply was the atmosphere of it. Dark and moody, and as an adult I remember a lot of episodes featured water or rain.
Why am I telling you this drawn out story? To make the point that atmosphere is important, it’s what you remember or at least what I do. This book has that in spades. I adored this. It’s been a slow few months for me in reading so this came as such a pleasant surprise. I’d open my kindle case eager anticipating returning to dreary Oxford and Anna’s tangled life. Paul Kearney did such a clever job of using the weather and Oxford to reflect Anna back at us. We ride through her day inside her mind, and it’s not till the last page that you can think back and see what was hidden in there.
Anna is the daughter of a Greek refugee, who lives alone in her house. A governess will appear on scheduled days but Anna spends her time mostly alone with her doll Pie (Penelope). One dreary evening she ventures out and sees something she should not, as most children tend to do, and her life begins a slow but steady unraveling.
So that I’m not simply gushing over this let’s divide this up.
The Characters – Anna herself is complex and childlike enough that I totally bought into her. She grew, and developed. Though she does from time to time exhibit the trope of ‘the wise child’ she will turn right back around to do something equally as foolish. Anna’s father was at times frightening (as he should be to a child) and other times I felt an immense pity for him. The rest of the characters all seemed to have their own depth and drives. Just as a note – though the summary mentions J.R.R. Tolkien and C.S. Lewis do not expect too much there. Rubs shoulders should be taken literally.
The Plot – At first it’s hard to see, this books takes a long time to get off but ultimately it was worth it for me. I feel like little pieces of the plot were hidden in the beginning that I missed, I’m planning on getting my own copy of this to mark up and reread. I don’t want to give much of this away, but for me I loved this.
The Writing –  This is where the book lost half a star for me, but I have a feeling on a reread I might bump this back up. The first bit of the story I had problems following because of our frequent paragraph breaks and jumps in locations and times. This did even out and I really enjoyed it when it did. Anna did also carry that ‘Wise Child’ trope occasionally as well. But as I noted above the atmosphere in this book was lovely, something that couldn’t have been done if it wasn’t for such a strong narrative voice.

This is a book and a story that I ate up like candy after just a small learning curve. I can’t wait to get my own physical copy to mark and note and I really recommend this one. If you love heavy atmosphere, child heroes, or just want to leave your quiet life for a few hundred pages – this is the way to go.

***I was provided a free copy of this book for review from NetGalley by the publishers, thank you! My review is my own thoughts and opinions and not swayed in anyway.***