Last week was less of a dud week and more of an ‘outside forces are affecting my reading’ week. I DNF’d three books, one because I was not enjoying it and two were just wrong time kind of reads. So ultimately I finished one thing. As always a video is up if you’d rather read than listen. 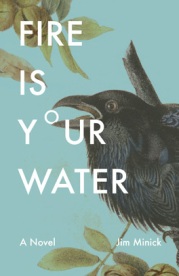 The one thing I did finish was Fire is Your Water by Jim Minick. I picked this one up mostly because of the setting in the Appalachian region in the US, where I’m from. I thought perhaps it’d be a bit more than what it’s described to be ‘a love story’. Unfortunately I think it might just be a love story. It’s fairly simple, the one little twist I saw coming and honestly from the beginning I had two theories on the ending and it fulfilled one of those theories. So nothing mind blowing. The best part of this for me were the chapters narrated from the raven’s point of view, but even those kind of puttered out towards the end as if he lost interest in the book itself. So nothing too thrilling, nothing that knocked my socks off.

The one book I DNF’d because I just wasn’t liking was Saints and Misfits by S.K. Ali. The very juvenile writing style here (protagonist is supposed to be 16-17 I think, but she sounds 13) killed this one for me. Wild assumptions were jumped too that just completely overwrote the important story I think this had deep down. Simply not for me, I think I’m back on a YA break after this one.

To the chatty part of this post! There seem to be some changes rolling down into my life. I’ve already lost one relative this past week, with two more on the slippery slope of ill health or age. I haven’t experienced that level of grief in several years, the last time was when both my Father’s parent’s died within a few months of each other. I  feel as if it’s my self-preservation taking hold, but I’m focusing on getting braced and ready for that. It’s of course affecting my reading life – which is my reason for bringing it up. I try to keep my reading wide and varied, but what I’m reading is narrowing in on several genres. So for the next few weeks or months we might see mostly an assortment of SFF, Mysteries, and Classics.

Also I’m working on keeping up a better schedule here, and I’m really enjoying my Friday posts ‘Looking Forward To…’. Look forward to more of those! I will also hopefully return to a few more reviews. However with the exception of one coming up all of my reviews are going to be books I purchased for myself or got from the library. It’ll keep me from worrying over deadlines and such.

That’s about it today! Thanks for reading guys, take care of yourselves. ❤