I’ve been super behind on everything, so here is me playing catch up! If you pay attention to the YouTube channel you have seen these reviews. If you don’t then here you go! I’m going to try to keep my blog up with the videos that go up over there. The exception might be hauls or so, those aren’t as easy to write out. Anyway, this is a (up until now) an unofficial series of videos I’d been doing, which I plan on making official, and calling The Hat Trick. My husband tells me ‘The Hat Trick’ is a term from hockey but can be used to mean a series of three things. These will be three interconnected reviews. They’ll be in the same topic, writer, publishing type, etc. The currently in the progress one is Japanese culture, but this one is my recent Sherlock reads! You can watch/listen to me here or just keep reading!

The first of the three was the latest anthology of Sherlock stories I’ve read. It’s the Penguin English Library edition of The Adventures of the Six Napoleon and Other Cases. These gathers what seems to be a themed collection of cases in which Sherlock doesn’t quite get it right, or he nearly misses the answer. I do think one of my favorites of the Sherlock stories so far was in here, a couple of really good ones actually. I liked the Mystery of the Yellow Mask (I believe the name is). There were also a lot of very interesting mysteries in which the women or the side characters were even more enterprising than Sherlock! A very cool collection overall.

I went with a twist next! A Study in Scarlet Women by Sherry Thomas. This was a

delight! Sherry Thomas does a really good job in this of twisting the Sherlock canon and recreating Sherlock as Charlotte. Everyone in this is changed and gender flipped, the best of the cast in my opinion is Watson – who I will not spoil at all as she was a highlight and one I really looked forward to. The story was interesting, but the best part was that manipulation of the characters. Sherry Thomas also did a great job of showing what it would have been like for a young woman striking out on her own, especially one who had been… dishonored is maybe the word I want. Super fascinating, if it didn’t have a touch of romance writing in there that emphasized odd bits. 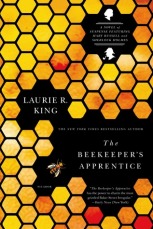 The best of the three was The Beekeeper’s Apprentice by Laurie R. King. I went into this, honestly, with hesitancy. I wasn’t sure if I’d enjoy due to a lot of hype I’d gotten around it. However I loved it. I gush a little in my video, and with some time I do see some small flaws but I still really enjoyed it. I’m a little worried going forward as I’ve been spoiled by some well meaning reviewers on a large plot point, but I will continue forward to see how it’s handled!

Let me know if you’ve enjoyed any of these and thanks for reading!