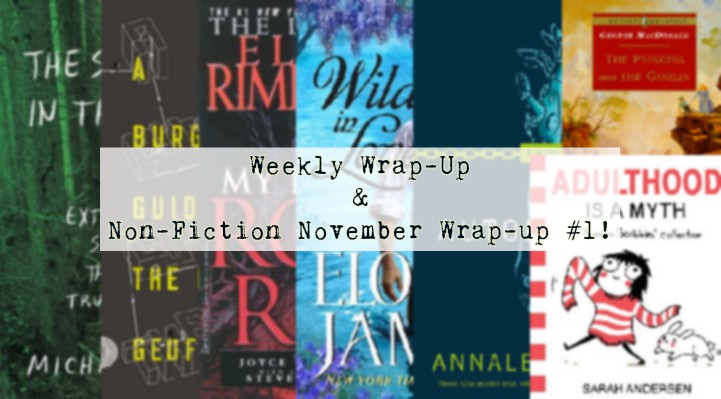 This is going to be a kind of hefty wrap-up for the week. I’m lumping my Non-Fiction November Wrap-up in with this so let’s go straight in shall we? I’m doing the non-fic first and then general fiction beneath. And as always if you would rather listen then read you can find a Youtube link in the sidebar!

First up is The Stranger in the Woods by Michael Finkel. This is the true story of a

man named Christopher Knight who ran off into the Maine wilderness and lived for years, something like 27 or so? He survived out there alone with no human contact, and stole what he needed when he needed it. Michael Finkel meets him and begins to write and research him. He also takes a good look at solitude and what being alone is like and what it means. I found this super fascinating, it’s definitely a topic I want to look more at and read on. He uses Christopher Knight as his focal point but I think ultimately it’s a modern look at those things and how it’s been approached in the past. I highly recommend this one if this sounds fascinating.

My next non-fiction was a little bit more of a miss for me. I also read on audio as I flipped through the physical book,  A Burglar’s Guide to the City by Geoff Manaugh. This was full of tiny random factoids and lines I found interesting but ultimately as a whole it felt drug out and not as well structured as my previous read. The ultimate TL;DR on this one was ‘Burglar’s challenge the accepted idea of use of Architecture, which makes them both genius and stupid’. That was the repeated mantra with a lot of looks a different ways this worked. I was not the biggest fan, but I can totally see how someone more into Architecture or basic criminal history might get more out of it.

That was it for my Non-Fiction November books. After that I moved on to fiction books,

starting with The Diary of Ellen Rimbauer by Joyce Reardon Ph.D. Technically this was written by Riddley Pearson and was written to accompany the Rose Red miniseries that Stephen King produced. This was okay. It definitely had it’s spooky moments, I’ll be the first to admit BUT it had two big flaws for me. The first was the clear author’s hand in the the narrative. It was meant to be a Diary yet because of this the author had to take some obvious steps to tell the story, such as complete dialogues or heavy atmosphere. So it didn’t quite come off as convincing. The other was the awkward use of Ellen’s sexuality. After she makes a rather awkward pact with a certain entity/thing she is both far more sexually active and attracted to women. It’s done in a way that it’s almost implied as it’s because of that pact and I was so not alright with that. So I wouldn’t recommend this I don’t think unless you really loved the mini-series. 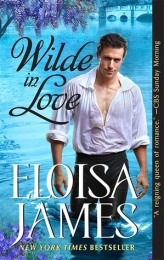 I also got a romance with Wilde in Love by Eloisa James. I’ve always been told that if you want to read historical romance then read Eloisa James. So I finally did it and I enjoyed it quite a bit! The female lead in this was the most interesting part to me. She’s, at face value, very prim and proper and has garnered quite a few proposals. She’s atypical that way for romance leads. But truly she’s smart, snappy, bookish, and loves lewd jokes and language and I love that. The lead is a bit… typical? He’s a returning explorer who got famous due to what is basically published, play fan-fiction of his work. The two do not get along and it follows their relationship. I liked it a lot, and if you enjoy romance I would highly recommend.

The final book, and the one I almost forgot in the video is Autonomous by Annalee Newitz. I liked this one a lot, but it didn’t quite work for me. The idea is a mix of 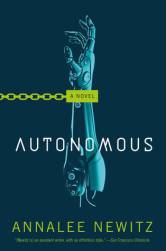 biotech and AI fiction. You follow two viewpoints, one is Jack who has reverse engineered a drug and sold it only to have it turn around and have disastrous results. The other is Paladin, a robot/AI who is assigned to find and apprehend Jack. I could have read the entire novel from just Jack honestly, I loved her story and narrative. Paladin unfortunately had the most potential but it fell so flat. She tried to look at the idea of gender and autonomy for robots and how that will be in the future but it didn’t quite make it. If it sounds interesting definitely pick it up but for me it wasn’t quite a knock out success. That said I’ll definitely read her work in the future!

I’d like to say I did two rereads, The Princess and the Goblin and Adulthood is a Myth. Both of these I really enjoyed and I’d highly recommend. I’m fairly sure I’ve talked about them before though so I shan’t beat the topic!

That’s it! Tell me what y’all have read and what you think of what I read! Thanks for reading!