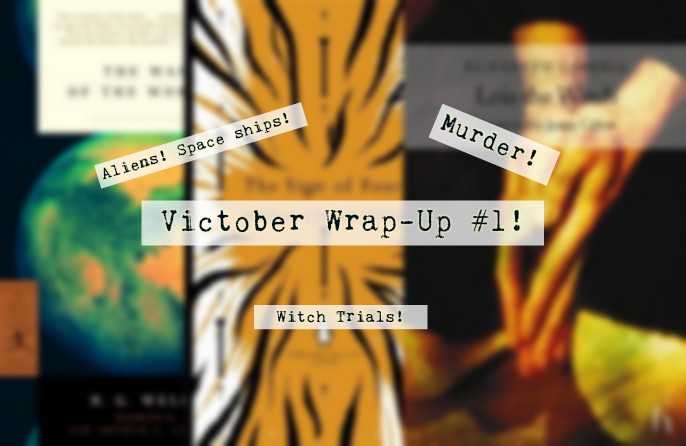 First check in of Victober! I’m so pleased I have some things to talk about for this week, and I enjoyed everything I read. As always for these posts I will have a video as well as the post up.

Worlds by H.G. Wells. It was published in 1897, and fun fact, like a lot of Victorian SF at the time it was believed to be real when it was turned into a radio show. People though aliens had landed outside London and wiped out a large population of the people there. The book itself was impressive in how well it aged. I had thought it was much more recently published when I was initially reading it and was surprised to find that pub date. It ages great, there were obvious gaps where you might could point out something like this would go differently, but overall it wasn’t as glaringly aged as some of the SF that people believed then. It’s a short piece, not even 200 pages, so if you’re interested I really recommend it. To summarize I’ll just say aliens land and start killing folks. That’s really all I can say, motivation or conclusion (both of which I liked) would be treading into spoiler land.

The next short piece I read was The Sign of Four by Arthur Conan Doyle. This is (I

believe) the second Sherlock Holmes novel/story. As far as Holmes stories go this one stands out to me for the high speed boat chase (as high speed as you can get in that era). Besides that it was fun, just like the others, though we really get a big ole heaping of colonialism in there. This one, probably due to the size, manages to show its age in the phrasing and attitudes. I also solved this one before the ending. In fact I was spot on from the first couple of chapters. The only thing I was truly lacking was details, but I was a bit disappointed here. I wouldn’t say it’s bad, I definitely had a lot of fun with it like I do most Sherlock stories. But I solved it and was fairly unimpressed with the dated language and the colonialism.

I read a short story as well, Lois the Witch by Elizabeth Gaskell. I am definitely

reading a lot of these short stories with the warning that these aren’t her best work so I went in just expecting ‘interesting’. I got a that and some tension and I actually connected with poor Lois. This is definitely not a happy story, instead it seems to be amping up the ‘otherness’ of the Americas and especially that of Salem and their fanatic religion. She managed to fit what felt like a cautionary tale about a woman alone and vulnerable into a scary story of Salem. It wasn’t great but as far as Salem stories go it’s probably one of the better ones I’ve read. I definitely say give it a go if you’re looking for something shorter in that setting and Victorian!

That’s it for my Victober Wrap-Up Part 1! Let me know how y’all are doing with Victober and if you’ve read any of these!