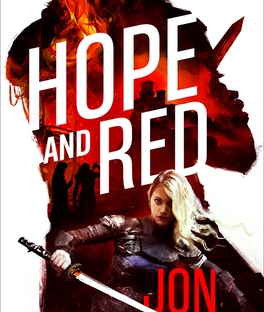 Hope and Red by Jon Skovron

In a fracturing empire spread across savage seas, two young people from different cultures find common purpose. A nameless girl is the lone survivor when her village is massacred by biomancers, mystical servants of the emperor. Named after her lost village, Bleak Hope is secretly trained by a master Vinchen warrior as an instrument of vengeance. A boy becomes an orphan on the squalid streets of New Laven and is adopted by one of the most notorious women of the criminal underworld, given the name Red, and trained as a thief and con artist. When a ganglord named Deadface Drem strikes a bargain with the biomancers to consolidate and rule all the slums of New Laven, the worlds of Hope and Red come crashing together, and their unlikely alliance takes them further than either could have dreamed possible.

Thoughts:
Hope and Red is one of those books I’d equate to eating popcorn. It was fun and a delicious romp – but doesn’t weigh you down too much. This can be excellent, and for a kindle read in my down time this was excellent.
The story surprised me with it’s bouncing perspective first then it’s characters. The story is told in two different views : Bleak Hope’s and Red’s. Bleak Hope has a tragic past and is fueled by revenge while Red’s past (though just as bad in some regards) is lighter. Hope grows up to be the equivalent of a samurai or ninja and Red is the best former pirate turned thief in town. The two make for an interesting duo, like something I’d love to see role-played in a D&D session.
Hope is surprisingly the darker of the two characters, while Red was a lot more like a kid. For me that was the strongest part of the book – the two characters. I loved Hope, she was determined but still had some naivety about her. Red was just the opposite. He didn’t seem to have a lot of drive but was fairly street smart. Mr. Skovron really made his characters clever, and believable. Even his secondary characters like Sadie were great, I enjoyed seeing everyone pop up throughout the story.
The story itself was engaging but I think the driving point for me were the characters and their dynamics. I’ve seen people equate this to Brent Week’s work and I’d say that’s accurate! I’ve not picked up Mr. Weeks second series but I’d put mark this as very similar to the Night Angel book I’ve read.
A fun novel, definitely worth trying for a light swashbuckling fantasy!

1 thought on “Review and Thoughts : Hope and Red by Jon Skovron”

My baby girl is a week old today. Totally unrelated but this has been the hardest and most rewarding week of my life. 😜 #adorawren #oneweek #daddysgirl
It's been a super hard few days starting to find our new normal so little moments of peace are amazing. 🥰💜👶💜🥰 #adorawren #princessofpower #sleepy #babyanddaddytime
We finally got to meet our Adora Wren. Our own little Princess of Power. 🐣👶🐥
Hubby took me for one last trip to the used bookstore yesterday before we go in to get induced tonight. I doubt I'll get much time to read them in the immediate future but I'm looking forward to when I can get to them! 📚😆📚 #lastbookhaulbeforebaby #usedbookhaul #bookhaul #bookstack #bookstagram
A book for me and a book for Adora. 📚🥰😁🥰📚 #books #littlegoldenbooks #artandarcana #DnDChristmas #dungeonsanddragons #bookstagram #newbooks
I picked up a *few* manga at the library. They should last me a day or two. The others are will definitely last a little longer 😆📚😆 #libraryhaul #library #bookstagram #starwars #historicalfiction #horror
Follow All Booked Up Blog on WordPress.com
%d bloggers like this: