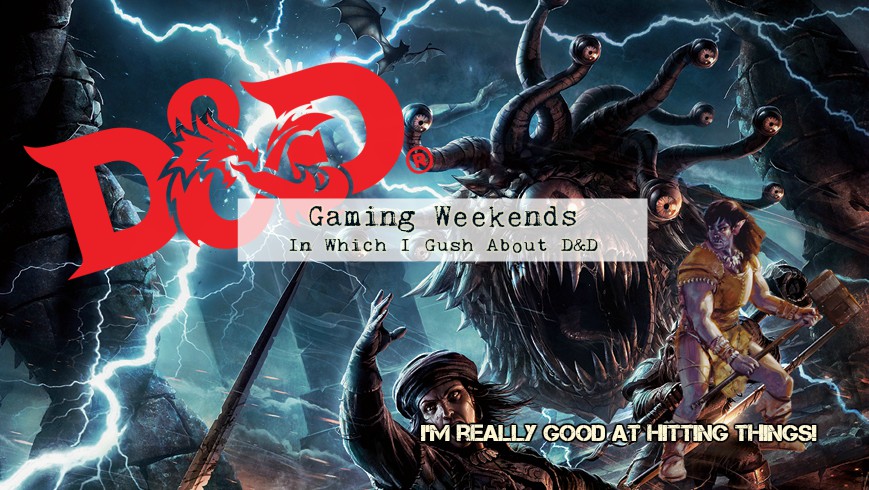 It’s back! Two years? Three years? It’s been a long time since I’ve talked in depth on the blog about my games. Occasionally I’ve posted about what I’m playing or planning but it’s been years since I did a weekly post about my games and thoughts. I have a lot of those as I’m trying to widen out my hobbies again and I’ve returned to both tabletop gaming and video games. So what have I been doing!?

I tried to find a fun gif for that, but really I failed. I did find a TON of absolutely fantastic Critical Role gifs and boy am I glad, I didn’t know they existed till now. But yes, we’ve been playing D&D again. We had a shakeup of our normal gaming group. We’ve also decided to stick to the fantastical settings for our foreseeable table top games. Currently my husband is running a fantastic game that’s mostly his own magic, with the occasional premade module thrown in.

We started this in November, possibly early December. With everything going on, I

wanted something simple to play so I created my first ever Fighter. She’s a half-orc and she’s really… she’s not that smart. She’s wise, she has some common sense! But she’s not going to when any History competitions. Her name is also Irma because I’m secretly a 90 year old lady who loves old lady names. She hits things really, and truly hard with a very large magical sword and has suddenly learned spells because I decided I wanted to pretend to have a Shardblade and made her an Eldritch Knight! Talk about a run-on sentence, sorry about that. I just get very excited. This version gives you just enough structure to build up something, but enough room to flourish. It’s grand guys, absolutely grand. wefreaking drove an Greataxe into a wyvern’s skull and rode it like a surfboard. Why have I never played a Fighter before?!

I have to say, I love 5th edition D&D. If you haven’t played it or D&D at all and want to try it I really recommend it. I’ve played several editions and of those this has been the best. 3.5 was super complex and I really appreciated that, but it was overwhelming at times. 4.5 was way to simple. 5 is perfect for me. Like Goldilocks picking which magical sword to swing I have settled on the current 5th edition. I’m slowly writing my own custom game, I can’t wait to talk a bit more about that but right now we’ve just dived back in the past 6 months or so and I am loving it. 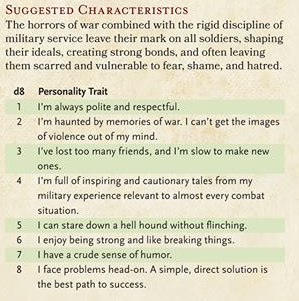 Probably one of my favorite things we have are these ‘random suggestions’ for things like backgrounds, personality flaws, or characteristics. You take the list, roll a the appropriately numbered dice and choose which one you obtain. Now I play fast and loose with this (especially with my custom stuff). You can take this verbatim – that’s the background you have. Or you can use this as a jumping off point and elaborate more. That loose structure that allows you to grow? This is a great example of that.

I’ve also been poking at the World of Warcraft beast again (who is surprised? no one). I might chatter about that next weekend. But to make it short, now is the perfect ‘Pre-next-expansion lull’ where there is plenty to do, it’s not super challenging, and the hype for new things is real. Good times.