Starting off the new year strong guys! These were some of the books that I think will stick with me, especially Lost Stars. Wow. Just. That ending guys… oh my goodness.

Birds of Pandemonium by Michelle Raffin
☆☆☆☆☆

I read this as my nonfiction pick for book club because as a kid I used to read books about birds for fun, non-fiction ones. This was a new one and about a topic I hadn’t read about in my childhood prowls through the library shelves. It’s been a while since I’ve stayed up because I just didn’t want to put the book down but I was up till 4 am with this one. I’m not sure if it was the huge departure from my usual reads that made this one so engrossing or the fact that I really enjoyed the personable writing style.
I would recommend this one to anyone at all interested in birds, or in conservation. Even for someone looking to try out nonfiction. This is a light, fun book with a very important topic at it’s heart and leaves you thinking about it afterwards.

I can’t give it a perfect score. Not yet. I’m not completely happy with the ending, I might be once I think about it, but right now I’m not.
The book itself though was great. The writing was lovely, I liked the characters especially the struggles and problems they had dealing with the Empire and what ‘honor’ meant to them. It definitely gave a new spin and dimension to the Empire that I didn’t have before from the movies.
Updated Thoughts! This was really incredible. After sitting and thinking about it I just really, really loved it. Until recently I was only a little bit of Star Wars fan. I had nothing to fixate or to identify with in the movies. Now I have Rey, and having that as a starting point then getting back into Old Republic MMO, I’m starting to really get lost into this universe. This gives you a real look and feel for the world outside the movies. Gives depth to the Empire besides just ‘Booo Bad Guys!’ I really recommend this. 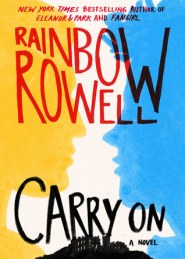 Carry On by Rainbow Rowell
☆☆☆☆

I really enjoyed this! I liked all the characters, with their flaws and positives. I enjoyed the setting, and I loved that it the characters talked like real people to me. There was just something something off about it that lost it that last star, some ‘omph’ that I didn’t get. Regardless I can see how this is something people would love and enjoy, and I do recommend this for fans of Harry Potter. I think this will be added to me ‘reread’ shelf so I can give it another shot at that fifth star.

The Hidden Life of Deer: Lessons From The Natural World by Elizabeth

It is hard to rate this one. I really enjoyed the bits of information I picked up through this one, about facets and parts of animals lives, different ways of animal tracking, etc. The book was clearly very influenced by the author’s own views and thoughts and contained those unashamedly. That’s cool, and I agreed with a lot of them but it makes it hard to review since there were a few I didn’t. And that’s okay, to each his own.
For what it was, a summary of a woman feeding deer over the course of the winter and her observations, it was great. From what I gather she’s quite good at what she does, which involves a lot of naturalist (is that the word?) work, so I respect her for it. I’ll probably pick up her other books like this like the cats and dogs books. It was enjoyable and informative, and did make me think so I would recommend it if it sounds like something you’d like